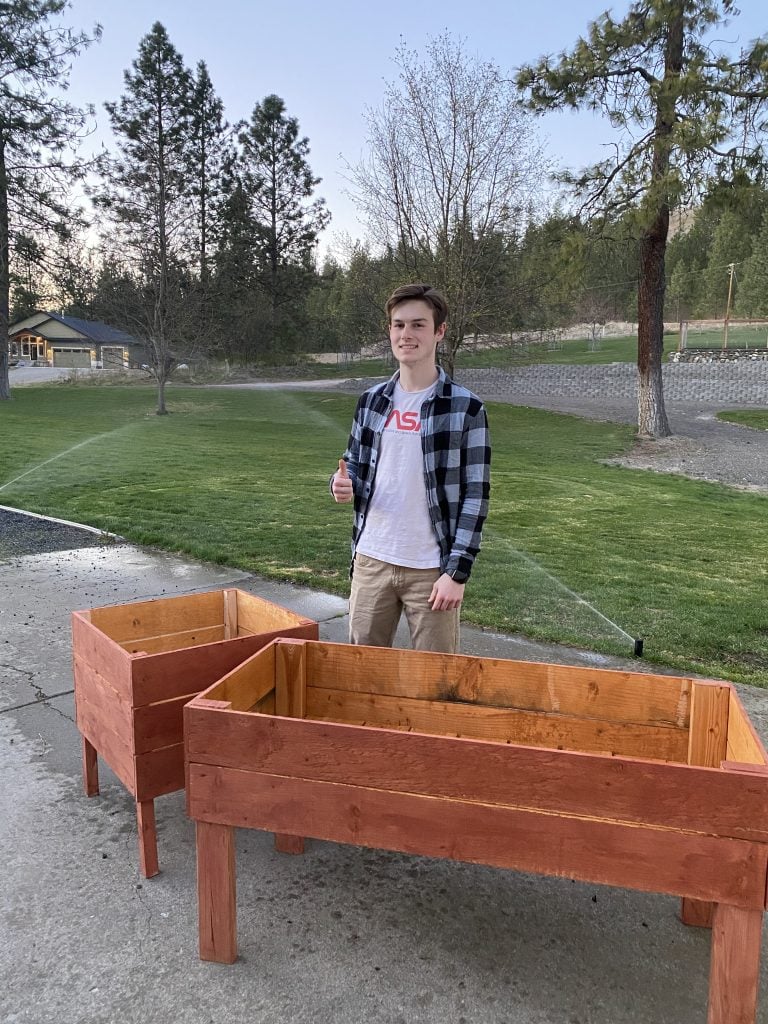 When Tryston Schmitt looks around his neighborhood along the banks of Lake Spokane, it is easy to believe that life is good for everyone. The busy 17-year-old, who spends Friday nights tinkering with his inventions for Robotics Club, has never lived a day unsure of where his next meal will come or if he will have electricity when he wakes up.

As student representative to the Nine Mile School Board, Schmitt says his eyes were opened to struggles his classmates live with on a daily basis. “When I heard a story last summer about a student who chops firewood so that he has light to do his homework, it was shocking. I didn’t realize poverty like that lives anywhere near me.”

Schmitt says the image stuck with him, tickling his engineer-like curiosity to find an impactful solution to help those in need who live close to his home. Meanwhile, he spent the summer of 2020 connecting with local nonprofits, including the Habitat for Humanity Store (1805 E. Trent Ave., Spokane) and Tum Tum Pantry (6424 Hwy 291, Nine Mile Falls). With both organizations having similar missions of neighbors helping neighbors, Schmitt’s budding vision began to grow.

As the pandemic seemed to overshadow everything else, an inspired idea bloomed in Tryston to address the growing food insecurity in Stevens County. While only 14.9% of residents lived below the poverty line in 2019 (according to U.S. Census Data), that equated to more than 8,000 families who were struggling to put food on the table even before COVID hit. Schmitt, a high school junior with dreams to study aerospace engineering at MIT or Georgia Tech, dusted off the plans for a planter box he had made his mom two years ago and started a new project – Boxes for a Better Community. Since then, the program has grown into a full-fledged nonprofit organization that is currently seeking 501(c)3 status.

The idea, Schmitt explains, is to provide those with food insecurity the means to grow their own food. “It’s important to have that sense of control — to know where your food is coming from — even when your income is unstable,” he says, noting that not everyone has the space for a full garden or even the knowledge of how to cultivate one. The custom design does not require much space, easily allowing anyone to grow nourishing vegetables on a porch.

Schmitt hopes to begin delivering planter boxes after Mother’s Day. Recipients will also receive one bag of topsoil and garden soil along with several starter plants of cucumbers, lettuce and tomatoes. He admits having learned many lessons along the way about how to grow healthy plants – and keep them alive – and so each planter box will include gardening tips and also dietary guidance for nutritious eating.

“I wanted to really lead an operation on my own that could make a difference. This project lets me help my community — one planter box at a time,” Schmitt says. “By working together, as a community, we can make Nine Mile and the surrounding communities a better place for everyone.”

Schmitt knows that a strong team is essential to success. Along with recruiting several family members and friends to help with his cause, he has enlisted the support of some influential neighbors. The Lakeside High School woodshop teacher, for example, is having students build donation boxes; and the Tum Tum Pantry is assisting with distribution. He also recruited school board secretary Angela Spencer and the school board Chair Greg Flemming to his own board of directors. They not only enthusiastically said yes to serving as advisors but have also chipped in to grow plants for the garden boxes.

Spencer, who serves as the school board’s student rep advisor, says it has been a delight watching Schmitt grow as he assembles a nonprofit business and recruits support. “It has allowed Tryston to develop a different type of relationship with people who he may have only saw one way. What that transfer in the balance of power does to help kiddos is tremendous. He will take that lesson – that our goal as educators is to support his success – with him out into the world.”

“It has been a fun community-building event,” Spencer adds. “It has also been really fun to see my school board president in a different light. I didn’t even know Chair Flemming had an interest in gardening, yet he has an entire greenhouse! He is a good steward of the plants.”

Neighbors can support the project by purchasing their own planter boxes. Schmitt sells a square version (24″Lx24″Wx26″H) for $43 and a rectangular box (54Lx20Wx26H) for $76. Custom stains and designs are available at an additional cost. Schmitt plans to put the profits toward buying seeds, gardening supplies and construction materials. To purchase a box or make a donation, contact Boxes for a Better Community at www.boxesforabettercommunity.org.