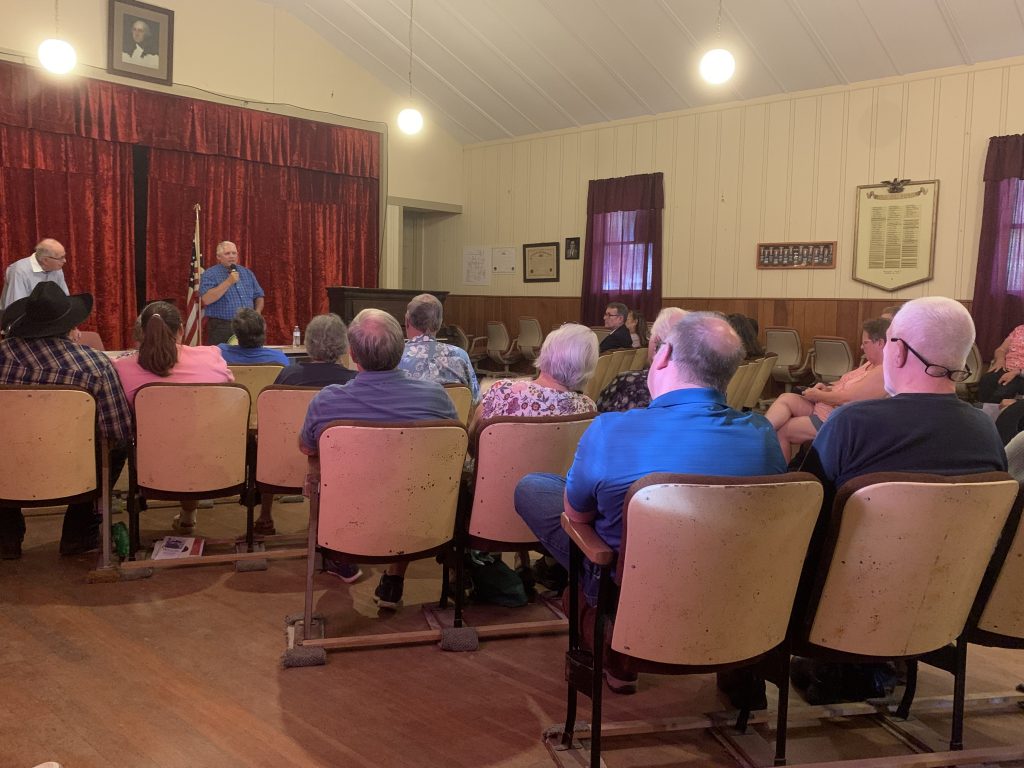 Candidates Night was held at Williams Valley Grange on July 14, in preparation for the 2022 midterm election. There are five positions being contested in Stevens County: county assessor, county coroner, PUD commissioner, county prosecuting attorney and state representative of legislative district 7. There were 13 candidates who spoke at the forum, which was open to the public. There were around 60 people in attendance. These are the candidates who spoke and what they stand for:

Maycumber is a lifelong community member of District 7 and currently serves as the Washington State House Republican Floor Leader. Maycumber has earned numerous awards in her political career including Legislator of the Year and was selected to give the 2019 GOP response to Governor Inslee’s State of the State Address. She said the reason she wanted to run for office was that she felt our lives were being changed from Olympia. She wants to focus on strengthening law enforcement, reducing property taxes, and improving internet in eastern Washington through broadband funding.

Williams is a homesteader and US Army veteran out of Republic, Washington, who teaches self-sufficiency and emergency preparedness training. He is also editor and author of The Pamphlet, a monthly publication that covers true stories in American history and how they apply today. Williams said he wants to make sure that parents are the primary stakeholders in their children’s lives, explore alternative education, combat our food crisis through local farms and increase the accessibility of elected officials.

“We spend over $18,000 per student in this state. What parent wouldn’t want at least half of that to homeschool their kids, put that money in charter schools, or do better. We can have a better education system when the money follows the student, not failing organizations that want to program our children,” said Williams.

Johnson is endorsed by the Stevens County Republican Party and currently serves as the precinct committee officer for Stevens County Republican Central Committee. He owned a securities firm for 16 years, a real estate firm for 12 years and taught college-level appraisal courses. He has a bachelor’s in business administration and a degree as a certified financial planner.

Johnson said he has a passion for property rights, both the US and State constitutions, and the Bible. He wants to enforce zero-based budgeting to maintain total transparency and accountability. He said that if elected, he’d ensure education funding comes from the property taxes of the state, not of individual homes.

“The Washington State Constitution states that education funding does come from property taxes however it’s supposed to come from the taxes on timber land, the timber, and all natural resources, minerals, ores. Anything derived from the property of the state not from people’s homes,” said Johnson.

Simmons is a fourth-generation farmer who has worked in the assessor’s office for seven years as the current use deputy where he’s responsible for overseeing over 750,000 acres of designated forest and current use farming land. He’s recently finished a six-year long project for the assessor’s office which involved him reclassifying over 43,000 acres that had been designated as forest land but no longer qualified. This has cumulatively reduced the property taxes for the surrounding neighbors by over $1,000,000.

“I’ve spent six years of my life guaranteeing that the citizens of Stevens County are not going to have to pay more taxes than they should and that’s what I believe the assessor’s office should do going forward,” said Simmons.

“Our office purchased iPads almost two years ago and because of a glitch in the software they’ve sat on our desk as paperweights, and no one has taken the time to figure that out… I think it’d be a pretty easy fix getting with some of the tech people,” said Stearns.

Force has been a lawyer for over 16 years and has a broad range of experiences in both criminal and civil defense as well as the defense of municipalities. In 2013, he played an instrumental role in establishing the Veterans’ court in Stevens County and in 2014, he was promoted to chief civil deputy where he has worked to establish civil commitment court, drug court and the diversion program. He said our jail is overcrowded and if elected, he plans to work with the county to build a new jail and establish a mental health court in order to keep our streets safer and address the mental health problem in Stevens County

“We took the time and set up a civil commitment facility in Colville, Washington to help people who are suicidal or are mentally disabled and routed them to the mental health facility opposed to putting them in our jail which is desperately strapped for space,” said Force.

George has been a prosecuting attorney since 2015 and has a law degree from the University of Washington and a Master of Law in Criminal Trial from California Western School of Law. She has worked in child support enforcement, juvenile, appeals and public disclosure in Klickitat County. She has exclusively prosecuted felonies since 2016 and in 2017, she took up a position in the Stevens County Prosecutor’s Office. When the courts opened back up after the first wave of the pandemic, George handled 18 of the 25 trials they had in superior court. George said she’s running because she wants to see a change in culture, rebuild trust with victims and use the tools at her disposal to combat crime at the root of criminal behavior.

“We often use what’s called a DOSA (Drug Offender Sentencing Alternative) sentencing. In some instances, where they have a lower offender score, which means they have less priors, they go through a residential treatment center and are on community custody for 24 months. For those offenders that have higher offender scores, they spend half their time in prison and half their time out on community custody,” said George.

Kristianson graduated from WSU in 1999 and joined the United States Marine Corps shortly after where he served for nine years. He then graduated from Gonzaga Law in 2011 and has been working in criminal prosecution with Spokane County ever since. Kristianson has handled a wide variety of criminal cases including special assaults, homicide, robbery, juvenile matters, identity theft, stolen cars, drug courts and post-conviction courts. He said that the lessons he learned in the Marine Corps have thoroughly prepared him for this position.

“The Marine Corps taught me everything I need to know about leadership… I too have a passion just like all the other candidates for the prosecutor’s office. We all think we’d do a good job. I think I would do a better job,” said Kristianson.

Tyndal grew up on a small farm in central California and then went to Fresno State University where he graduated with a degree in political science. Afterwards he moved to Washington D.C. and worked as a congressional staffer for 4.5 years. Tyndal then attended law school at UC Davis and in 2000, joined the army in their JAG Corps program for 10 years. This program allows individuals to make an immediate impact as an attorney in the military law branch of the government. He said that the majority of his time in the JAG Corps was spent in criminal prosecution, but also worked cases involving military justice, administrative and environmental law. For the past 10 years, Tyndal’s worked as a deputy prosecutor in Stevens County.

“You haven’t practiced law until you’ve figured out the environmental ramifications of an artillery shell…That time as a brigade JAG advocate I think I’ve basically done the job that I’m running for here in Stevens County. And that is to provide that legal assistance that legal guidance to the county commissioners, to the elected officials, to the department heads while also handling the criminal prosecution side,” Tyndal.

Colvin has lived in Stevens County for 36 years and served as deputy coroner and chief deputy coroner between 2017-2022. She said she was wrongfully terminated after declaring her candidacy. She has completed hundreds of death investigations and completed over 30,000 hours of on-call duty. In 2021, she responded to 85% of all coroner death scene investigations in Stevens County. Colvin’s credentials include completed trainings with the Washington Association of Coroners and Medical Examiners, and she is currently set to take her board exam for the American Medicolegal Death Investigation, scoring a 98% on the practice exam. She also pledged that if elected, transportation of the deceased would be done locally.

“The biggest problem I see is that a lot of our money is going out of county. So right now Stevens County Coroner’s Office is using technically a company out of Idaho. Most of them are stationed out of Spokane, so it’s taking a lot of time for the transport company to come out and pick up the deceased that are laying there, so I would bring it back and use our local dispatch and our local funeral homes,” said Colvin.

Sampson has worked in the medical field for 32 years and has been the Steven County Coroner for 8 years. She has been a board-certified Medicolegal Death Investigator since 2001 and became a registered nurse in 2017. Sampson received training from an expert forensic pathologist while working for the Spokane County Medical Examiner’s Office from 1999-2010. She said that her medical background has been invaluable to her competence as a coroner. She also said that the owner of the transport company is from Coeur d’Alene, but all business is conducted out of Spokane. Sampson’s efforts also got the office a federal grant to provide funding for two properly equipped vehicles and she said that transport could eventually be done in-house.

“On many occasions they’ve gotten there faster than the prior agency, but it comes down to money. I put it out to bid. They’re cheaper than the local company and provide fast service for two people,” said Sampson.

Inglis has been in Stevens County for over half of her adult life and worked as a paralegal in Spokane County for 10 years. She is currently a realtor and co-owns a construction company with her husband. Inglis also serves as president of the Lake Spokane Chamber of Commerce. This has given her experience with legislative issues, strategic plans for non-profits, budgeting for projects and coordinating with engineers. Inglis promises to be fully transparent with the citizens of Stevens County said that if elected, she will readdress the lack of broadband in our area and establish the proper infrastructure.

“I live in South Stevens County, and I will make sure that they get service with water, septic, sewer and their broadband,” said Inglis.

Carpenter has served as the PUD Commissioner for 18 years and is a lifelong resident of Stevens County. Carpenter grew up in Chewelah, graduated from Gonzaga and went on to play three years of professional baseball for the San Francisco Giants. He then returned to Gonzaga to get a K-12 teaching certificate and has been active in the community through volunteer coaching for the past 35 years. During his time as commissioner, the PUD has expanded to 12 water systems in Stevens County and six in Spokane county along with seven sewer systems in Stevens County. He said that the opportunity for broadband was available 10 years ago, but it would have proved too expensive for Stevens PUD customers.

“It would’ve been detrimental to all of our customers if we would’ve tried to take that initial investment on and hire more people and more equipment. It probably would’ve bankrupt us,” said Carpenter.

Election Day is August 2 and ballots must be dropped off at an official drop box by 8 p.m. that day. Mail-in votes must be postmarked by August 2. For more information visit https://vote.stevenscountywa.gov.