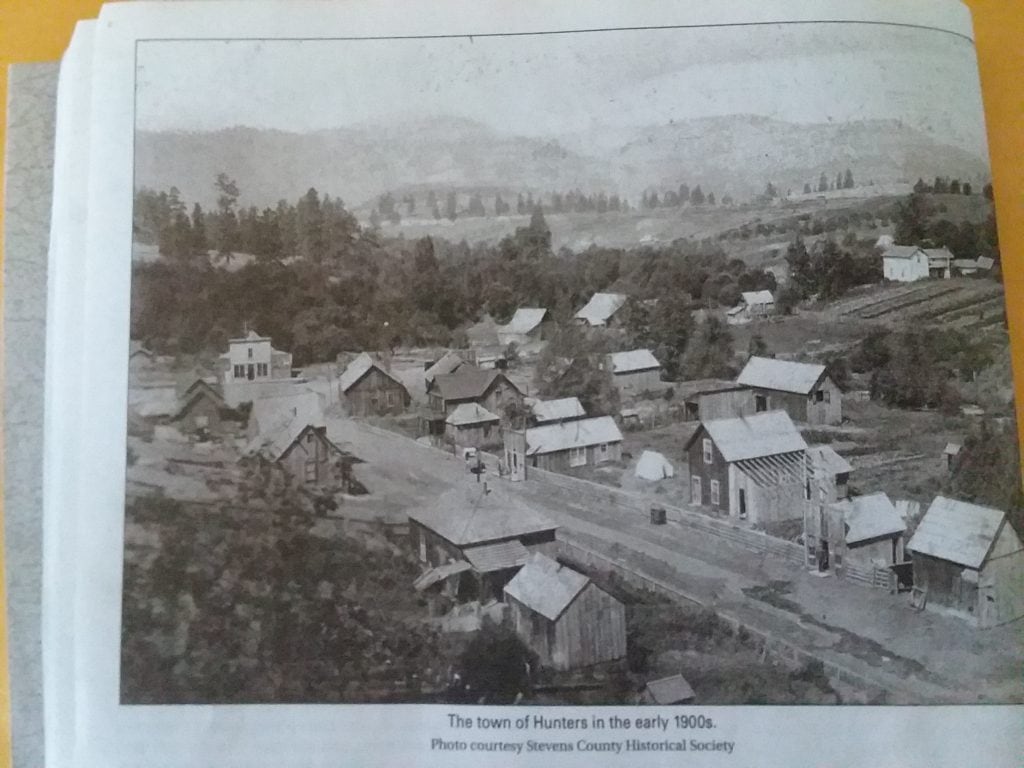 During the late 1800s, Hunters became one of the biggest, busiest towns in Stevens County

In the year 1880, James Garfield defeated Winfield Hancock to become the twentieth president of the United States on Nov. 2. The first cash register was patented by James and John Ritty on Nov. 4. Thomas Edison, inventor of the first light bulb, created the first strand of electric lights, which were strung around the outside of his Menlo Park Laboratory at Christmas. And a man by the name of James Hunter arrived in the Pacific Northwest.

James Hunter was born on July 27, 1829 in Nova Scotia, the son of James and Mary, natives of Scotland. He was educated and reared in his native home. In 1847, he immigrated to the United States and ended up in Boston where he was promptly employed, working on a whaling vessel until 1851. Hunter was a man of courage and physical powers. He became stranded in San Francisco and possibly observed the great fire of May 3-4, 1851. This fire burned over 2,000 buildings and destroyed three-fourths of the town that was a major port (only two years after gold was discovered in 1849 in Sacramento Valley). Hunter stayed there for two years while he helped catch wild horses, did some mining, and became a farmer.

In 1860, Hunter married Martha Cleveland; they had five children and he worked his farm in Butte County, California. Hunter had heard the phrase coined by New York Tribune editor Horace Greeley — “Go West, Young Man, Go West” – and it stirred James. He was already in the west, but he knew there was so much more of the west to see. So, in the spring of 1880, Hunter headed to the Great Northwest. He left his family behind with the promise he would send for them soon. On August 22, 1880, he laid eyes on the great Columbia River, the rich fertile farmland and the massive stands of timber that surrounded him. As he gazed at the Columbia and the pristine clear water creek (known as Hunter Creek) running next to his camp, he knew this was where he was going to start this next and final adventure with his family. To this day, (on all new and old geographical maps) the creek is still known as Hunter Creek.

Three men traveled with Hunter. All they had with them were the provisions that could be carried on their horses’ backs. His three companions soon became discouraged and left Hunter by himself. With his horse and 25 dollars in his pocket, Hunter was determined to make this his next and final adventure of his life. He was here to stay. He knew there would be hardships to endure, like aching muscles and a sore back that came with the arduous tasks to accomplish. All goods at that time had to be freighted over 100 miles, and the country in between was still wild. Hunter was the only settler within 30 miles of this place. But he prevailed. And in keeping his promise to Martha and the five children – Mary, Adelade, Cora, James and Helen – they were all reunited in 1884. He was a staunch republican and said he voted for Abraham Lincoln.

Little did Hunter know, the town of Hunter (named after James of course) would become one of the biggest and busiest towns in Stevens County during the late 1800s and early 1900s. At some point, the town’s name was changed to Hunters (with an “s”), but the reason is unknown. The word soon spread, (social media in those days being word of mouth, telegraphs, and newspapers) and people were quickly moving to the fertile valleys; the need for services grew.

The first post office was opened in the home of Will Hamilton in 1885. It remained there until an actual building could be constructed. The first general store opened in 1890. It was also at this time that the land was surveyed and platted; lots sold for five to 25 dollars each.
In 1895, a ferry was built to cross the Columbia River and it remained in service until 1936.

In 1896, Dr. Roderick D. McCrae opened the town’s first doctor’s office and ministered to people’s medical needs from miles around. According to hearsay information, which is not verified, the good doctor was trained as a veterinarian, but decided people had greater needs. He pulled teeth, set broken bones, lanced boils, stitched up knife stab wounds, cleaned sores and delivered babies. It is said he was a true country doctor.

In 1897, the Cedonia Union Church was built about five miles north of town. It was one of the first places of worship in the area. It was followed in later years by the First Presbyterian Church in 1909 and St. James Catholic Church in 1915.

The date of the first school is unknown. It opened in a room above a sorghum mill. It was probably built in the very early 1900s.
The Hunters Exchange bank was opened in 1908 and remained open until 1931.

In 1910, telephone services came to Hunters. All the lines were built and maintained by the settlers themselves. Later, the Interstate Telephone Exchange came to Hunters and was in use until the dial telephone system arrived in town. In 1908, the first published newspaper for South Stevens County was the Hunters Leader. In 1917, it became the Hunters Messenger and was published once a week.
Hunters continued to grow and, by 1910, was among one of the fastest growing communities in Stevens County. I wonder if this was part of the vision James Hunter had when he arrived in 1880. There were approximately 22 stores, and the town had its own judiciary system, hotel, numerous creameries, and a freshwater system; electricity became a reality with the help of a power plant at the falls on Hunter Creek. In addition, large orchards were irrigated by an elaborate system of a lake, flumes, and ditches. During harvest, over 100 people were employed to pick the apples and other various fruits owned by The Hunters Land Company.

The Hunters Community Fair started in 1910 and is still active to this day; it occurs on the third Saturday of August. The big feature of the fair in those early days was horse races. It is the oldest one-day fair in the state of Washington. It is Hunters’ claim to fame, and the residents are extremely proud of it.

But as it is in life, tragedy hit in 1912. The newly growing town of Hunters was destroyed by a massive fire that wiped out most of the business district. But the little town of Hunters and its residents, whose pioneer spirit was not to be denied, began to rebuild, learning from the lessons and the technology that was available to them in 1913. And rebuild they did. Not only did they rebuild all the retail stores, but they now had a library, school, theater, law offices, churches, a beauty shop, a barber shop, gas stations, their own band and symphony, and many other types of businesses that a new growing town required.

For 23 years the town continued to expand and grow. But then tragedy struck again in 1936, when a fire once again destroyed almost the entire business district of Hunters. Some folks gave up and moved away. But most stayed and rebuilt in earnest for a second time. The Columbia dairy was built that year. The richness of the fertile valleys was excellent for raising cattle. The dairy flourished as Spokane was growing rapidly and the demand for dairy products was huge.

The resilient town of Hunters, rebuilt after two major fires, continued growing until Dec. 7, 1941, “A day that will live in infamy,” said President Franklin D. Roosevelt.

The beginning of World War II changed the dynamics of the United States and the little town of Hunters, Washington forever. The requirements to fund a massive war effort required all Americans to come together and put personal gain behind. Many left Hunters, some to join the military and others to work in factories that offered better pay and the lure of a better life in the big city.
Come back to the Loon Lake Times next month to read: “The rest of the story – Hunters, the later years.”