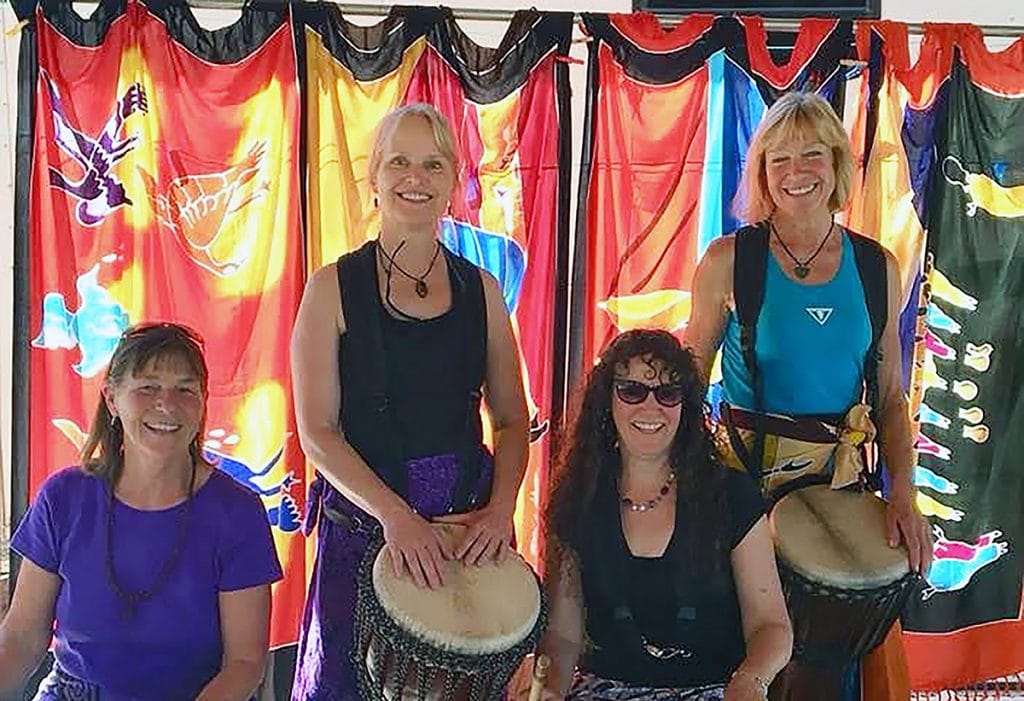 Last year’s Taste-of-Chewelah-goers caught the beat from four lady drummers who call themselves 2Summit4Djembe. Taste of Chewelah, a Chewelah Arts Guild community event, has featured musicians as part of the mix for several years, but last year was the first time for the drummers.

“The favorable comments about how much fun it was to hear them prompted us to ask them for a return performance,” said Sally Beane, one of Taste’s committee members.

Shari Weeks was first inspired by World Music while teaching an elementary school music class for the Colville School District. The group of four came together when Susan Liebermann, Janice Mackey and Susi Meyer each found their own reason to join Shari Weeks’ quest to pursue African drumming in their group called 2Summit4Djembe.

Susan Liebermann first met Weeks while both were teaching at Summit Valley School District. Though Liebermann had never formally studied music, she was thrilled to discover drumming and the fact, so she says, that anyone can play whether they have a musical background or not.

Janice Mackey was also introduced to the group through her work at Summit Valley School District, where she served as a para-educator. “Their lunchroom talks about drumming piqued my interest, and joining the group filled a need for both a challenge and friendship,” Mackey explained.

A retiree from the United Postal Service, Susie Meyer met Weeks through their mutual love of horses. Susie was breeding sport horses at the time as well as raising grass-fed beef and gardening organically.  Soon, however, Weeks introduced Meyer to the djembe, a rope-tuned skin-covered goblet drum played with bare hands, originally from West Africa, and, says Meyer, “a brand-new passion was born!”

The group works hard to hone their skills, including attendance at many Drum Brothers camps and workshops. It’s all worth it, according to Weeks. “Sharing rhythm with others creates a wonderful sense of community and fellowship,” she said. “We have as much fun as the listeners.”

This year, Taste is scheduled for Thursday, June 20, beginning at 4:30 p.m., and will include 10 eateries offering samples of their fare, exhibits from local artists, and music, music, music. The evening will be capped with delicious desserts served at Quartzite Brewery and the giving of final bids in a silent art auction. Tickets for the event are available at Akers United Drug and Valley Drug Co. and Chewelahartsguild.org. They are $15 for adults, and children under 9 are free when accompanied by a ticket holder.

Musicians volunteer to play Taste of Chewelah but are encouraged to put out a tip jar. Other musicians wishing to participate should call either Sally Beane at 509-675-7187 or Robert Nein at 509-499-4376 by June 11th.