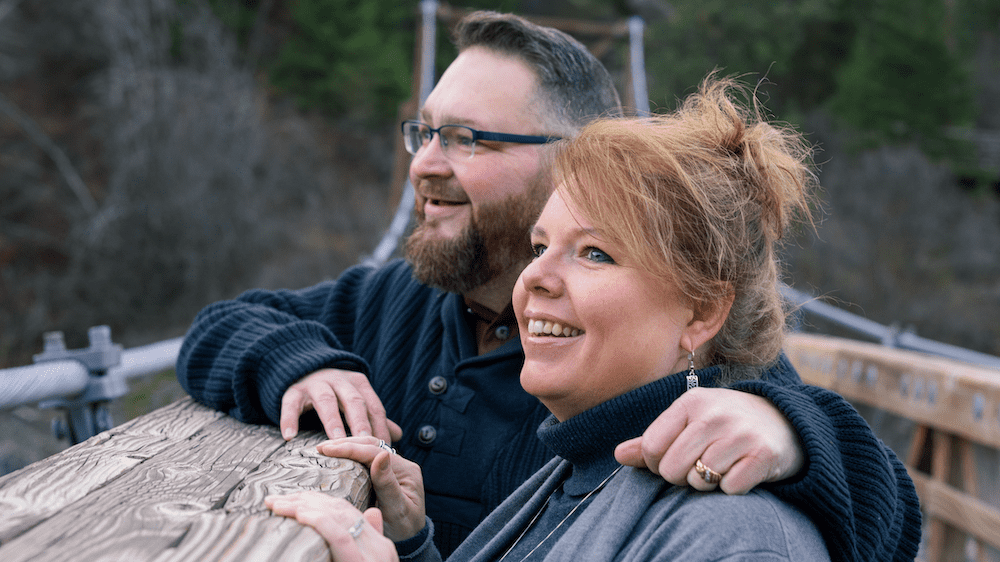 Wayne and Cindy Farris have been very involved in the Nine Mile Falls community for the past two years. The pandemic delayed their plans to plant a new church in the area, but they found other ways to serve the community and get to know the people in their new hometown. Now they are ready to launch their first service at Journey Foursquare Church on Sunday, Dec. 12 at 10 a.m. at Lakeside High School.

Sent from their home church, Lifespring in Edgewood, WA, as part of the Pacific Northwest (PNW) Church Planting Movement, Wayne and Cindy Farris moved to Eastern Washington to plant a new church right when COVID first hit in early 2020. “During the initial days of the pandemic, we couldn’t gather in houses much less anywhere else,” Wayne said. “And so, we felt the Lord was calling us to be a part of the community and find other ways to impact the community for good.” That led Wayne to begin exploring opportunities of becoming a chaplain while Cindy worked at the school district; and many other things began to develop.

For the past year and half, Wayne has worked part-time as an administrator for the leaders of the PNW Church Planting Movement, a conglomeration of denominations and church organizations helping each other plant churches to spread the gospel. About 30 different churches are involved with this ministry from this region alone. Wayne also served with Pastor Mike Mead as the Church Administration Pastor at North Church during the pandemic up until this past month.

Wayne has been in some form of pastoral ministry for 30 years, most of which was spent working bi-vocationally (working a full-time job while pastoring on the side). His career started at the Boeing Company and he quickly found himself climbing the corporate ladder, always thinking he would continue working full-time in business and pastoring part-time.

The pivotal point was when Wayne’s company was relocating to Arizona and he was offered two choices: he could leave his job with a severance package or move to Arizona. Funny, Wayne thought, just two months earlier Cindy had told Wayne that if he doesn’t give up the security of the full-time paycheck, the Lord might just take it away. So, they decided to launch into full-time ministry and pray about what that meant for them at this point in their lives.

Wayne and Cindy had lived in western Washington in the Puyallup area for a number of years, but they had also spent time in Spokane 30 years previously, when they were first married. Here they were 30 years later, he thought, praying about what to do. There were opportunities to pastor in existing churches, but the Foursquare movement was asking them to plant a new church and to consider the Spokane area.

The search for a place to launch Journey Foursquare Church

Wayne said, as a married man with four kids (two of them married) and grandchildren, he wanted to stay in the Northwest. They spent a few weeks driving around Western Montana, Northern Idaho, Oregon and Washington. They also asked some local pastors to pray for them. The pastors suggested Deer Park as an area to consider.

Wayne heard from many people of faith that they would have these “God moments” and just know the right decision when it was time. As he drove through various cities, Wayne would stop his car, play a worship song on his guitar and pray. He was growing frustrated that he wasn’t having that “God moment” yet.

Wayne called a friend in Airway Heights and asked to meet for coffee. Rather than going all the way back to town to reach the highway, Wayne figured there must be some back roads that would get him there. He pulled up his GPS and started driving down Swenson Road. When he hit the stop sign in the Suncrest area at Highway 291, he had his “God moment.” He felt like the Lord said, “Welcome home.” He ended up driving back to Puyallup that night and told his wife that he had prayed about some areas and felt he might be hearing from the Lord. He didn’t tell her the place, as he wanted her to have the same freedom to pray and see if she had the same feeling when they reached Nine Mile.

The next weekend, they repeated that same trip from Deer Park through Nine Mile Falls. When they reached the stop sign at Highway 291 and Swenson Road, Wayne’s wife said, “I think you need to pull over.” So, they pulled over, and Cindy said, “Let’s just drive this road a little bit.” So, they drove down Highway 291. Then she suggested they stop in the Pizza Factory to have dinner. Before they left Pizza Factory, Cindy had applied for a job at the school district and made five new friends as she began asking people what they thought about the area. She repeated Wayne’s sentiments and thought the Lord was saying, “Come home.” Within a couple of days, Cindy got the job at the school district; and two weeks later Wayne and Cindy moved to Nine Mile Falls.

Just to be sure he was making the right move, Wayne contacted the other churches in Nine Mile to let them know who he was and what he felt the Lord was calling him to do, but that he wouldn’t come into the Nine Mile area without their permission and blessing. He wanted to partner with them and not be seen as competition. It was exciting to hear back from those pastors and have their support, Wayne said. The pastor at Suncrest Family Worship Center called Wayne right away, and they started meeting every other week for coffee, prayer, and friendship. Other churches have reached out as well.

For many, the COVID pandemic has been a difficult time, but Wayne and Cindy found it to be a real blessing. It gave them time to define what they would be doing at this stage in their lives. Wayne thought his calling was about more than preaching or opening a building, but to be a part of the community. He feels Nine Mile has as much to offer him and his family as they have to offer Nine Mile, and he feels blessed to be a part of that community.

Wayne was looking to build relationships in the interim, so he reached out to Fire District 1 about chaplain work at the fire department. Wayne is honored to work with Fire Chief Mike Bucy and Lt. Pat Lowrey, and the incredible crew at Stevens County Fire District 1, as well as the Deer Park Ambulance folks. He tells them, “Their job is to serve the world, and my job is to serve you.”
One goal the couple established was that they wouldn’t start a public church service until they knew at least 100 people by name. Wayne said it’s about people for them, not a building, church name, or a service on Sunday. So, they kept their eyes focused on people. They now have a list of well over 200 names, and decided it was time to launch Journey Foursquare Church.

The first opportunity for a venue was at Lakeside High School. They will be meeting on Sunday mornings at 10 a.m., and their first service will be held on Sunday, December 12. Then there will be a couple of Christmas services in a row leading into the Christmas season.

Wayne has been meeting with the Journey Foursquare church launch team for the past five months in their home on Sunday nights. Their plan is to start small. There’s a lot of opportunity for people to come join and be a part of what they’re doing, and step right into areas of service and roles at the church.

Who is Foursquare Church?

The Foursquare Church is focused on planting churches, as well as local and international missions. They were one of the first churches to send missionaries overseas and band together to help people through the Great Depression by offering food, shelter and clothing. This service would later become food pantries and clothing closets, many of which started in a Foursquare church.

Vision for first six months to a year

One of Wayne’s initial goals is reaching out to people in the area who have not found their flavor of church family yet. Some members of the Nine Mile Falls community travel out of our area to go to church, like 45 minutes to go to Life Center or an hour to go to Post Falls. He wants to offer them an opportunity to go to church locally in their own community and make an impact with their own neighbors. He understands there are other churches around, but realizes it is going to take all kinds of churches to reach all kinds of people. While he doesn’t think they’ll do anything better or more than what the other churches are doing, they’ll be a little different. And if they can build something that will reach someone that the other churches haven’t been able to reach, then he’ll have achieved his goal.

Within six months, they will have started several home groups and other connection points. “We want to dig wells rather than build walls,” Wayne said. He wants to go out to where people are to receive hope during a time when many are ill-informed and hopeless. What we have been going through in our country these past two years feels like despair, and feels heavy. Wayne and Cindy want to come alongside the community and encourage people in their own journeys.

“We all have a journey and a story to tell,” Wayne said. “The things that have happened in my journey and past are not the same as yours. We want to connect with people and realize that our stories can intersect. And then we want to come to the Lord and say, ‘Can you create something out of my journey?’ Maybe we see our journey as all there is, but if we can turn the page and ask the Lord what He wants to add to my journey, we will find greater hope and purpose.”

The mission of Journey Foursquare is to love people to their greater story in Jesus. To create a safe place where people can doubt, be broken, and ask questions. To be wherever we are in life and then allow the changes that God wants for each of us to take place.

Wayne said, “It’s a come as you are kind of service. The school is obviously a very safe place, even for people who might not have been in a church before. We’ll have coffee and donuts ready for you. We have an exciting program for your kids. All of the church’s workers are background checked, trained and ready to go. The music will be contemporary. The message will be encouraging. The entire service will last about an hour and fifteen minutes. We encourage anyone who wants to start a new Christmas tradition to come on out.”