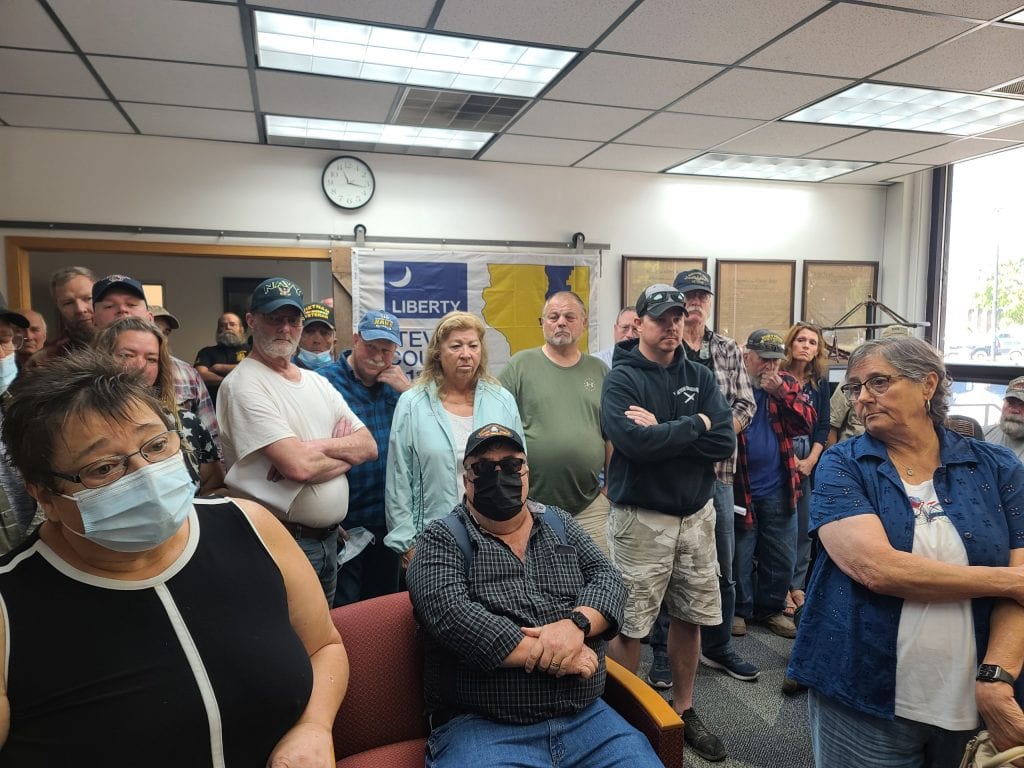 Veterans Demand to Be Heard

I have had veterans share stories of getting rides to Spokane Valley and sleeping on the doorstep of a veterans service office just to receive the services they have already earned.
-Jacqueline Maycumber

Last spring, Maycumber was able to get the grant extended for another two years. The VSO program was awarded $275,640 with quarterly payments of $34,455. This prompted VSO Gumm, who currently receives a $52,000 annual salary and 57 cents a mile, to request an increase in pay to $60,000, an annual 3% raise, a part-time secretary and a company vehicle, during the commissioner’s executive session held on August 16, 2021. Gumm mentioned there was plenty of money available for a raise because the VSO program will end the year with a $20,365 budget surplus. When Gumm’s request was denied, veterans who attended that session to support the additional resources were quickly silenced by the commissioners. In response, an open meeting was scheduled for Monday, August 30, which the veterans feared could be used to discuss Gumm’s termination.

On the morning of the hearing, August 30, 2021, one by one, over 50 veterans gathered in support of Gumm at the commissioner’s office in Stevens County. The small entryway quickly filled as they were led to another small room to wait for their scheduled time. As they packed the commissioners’ chambers, standing room only, Phil Rose stated, “Several weeks ago we met here to speak about what Bob has done for us, and we were silenced, shamefully. This is our chance to make our voice heard.” Several veterans proceeded to tell their incredible stories of how Bob had helped them get housing, pay medical bills, get spousal support, and a higher disability rating in order to get approval for needed medical treatments. Numerous letters were also sent in to the commissioners, praising Gumm for his dedication in serving local veterans.

Commissioner Mark Burrows stated, “Wes McCart said something in the last meeting that kind of upset some of you. He said we could fill the room with people that weren’t happy and here is the nuts and bolts of that: we have people calling in and talking to staff and they can’t get ahold of Bob. Probably because he is overworked. Right? So, from our perspective the program could be running better.” However, there was not a single veteran in the room supporting Commissioner McCart’s comment that he could fill the room with unhappy veterans. In fact, it was quite the contrary.

After listening to the veterans’ words of support and concerns, Burrows assured the audience that the board does in fact support Gumm and the Veterans Services Officer’s position. “Bob has helped me. I could be in the audience now,” said Burrows. “So, I get it. But if somebody is telling you we are not supporting this program, that’s not true.” Burrows explained that he “asked Bob for supporting numbers to show us [commissioners] what he is doing, and we got one piece of paper with the name of the counties he is serving with the number of people he is serving, but no supporting documentation. So, that is not a lot of data to give someone a raise off of, in my opinion.” He went on to say, “So Bob is our employee, and we are responsible for the grant. Right? How the grant money is administered. Half the time we don’t even know where Bob is. That’s part of the workload portion that we don’t understand. I am not your enemy.”

Vicki Carte, Director of the Spokane Conservation District and the Vets of the Farm Program, offered her services. “If there is data that needs to be brought forward, I would be willing to help with that, if that is a package that needs to come to you, so we can move forward,” Carte said. “He [Gumm] is the champion for them [veterans] and I encourage you to look at the value and importance of that. He is a resource you should be proud of in this county.” There was also discussion that Gumm could keep some type of log in order to account for his whereabouts and who he was helping to justify the administration of grant funds by the commissioner’s office.

Former Commissioner Steve Parker attended the meeting as well; he also spoke in support of Gumm. “Bob was by far the top guy for the job,” he said. “One of the things you are hearing loud and clear is Bob develops a rapport with his veterans and he is passionate; and he digs in, and he is skilled.” Phil Rose, a veteran speaking on behalf of Bob, told the commissioners, “Bob is the one who holds them [the Department of Veterans Affairs] accountable and gets our benefits we’ve been promised.”

Later, Gumm told the Loon Lake Times that the Commissioners had not requested more detailed documentation than what he had already submitted with his request for a raise. Gumm also said that the commissioners turned what was supposed to be a meeting to discuss a raise into a performance review.

“Everything they say they wanted they already know. And that was the first time I ever heard that they needed more details,” Gumm said. He went on to say that he had already submitted documentation confirming his travel to all four counties and that he had served at least 123 veterans during the month of July alone. Gumm explained that he normally sees veterans’ multiple times, and that they call him frequently. The documentation also highlighted major successes that occurred within that month. “My job is to serve veterans,” Gumm said, as he opened his calendar that documents where he is each day. But the commissioners did not want to see that. “Their job [the commissioners] is to support me. If they cannot support me, shame on them. They support the VSO position; they do not support me.” Bob said that he feels Commissioners McCart and Burrows want to terminate him, and that was what the original meeting on Aug. 16 was really about.

Watch for updates to this story as it develops.